Skip to main content
Labels
Posted by Heidi (ReadingGrrl) May 13, 2020 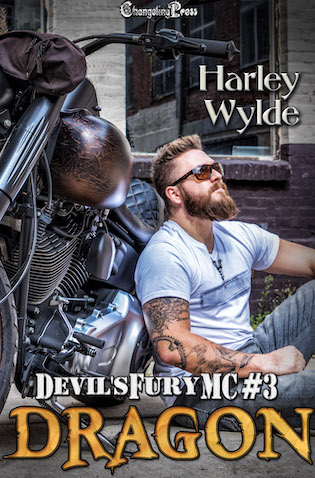 
Lilian — I may have survived my time with the Colombian cartel, but it nearly broke me. Even now, I can’t stand to be touched by men. But there’s one man who makes me feel safe. Dragon. He’s intrigued me for so long. I never counted on things getting heated between us, or me ending up pregnant. He made it clear he doesn’t want me, or a baby, so I ran. I thought I’d found sanctuary with the Reckless Kings, but it only put me in the crosshairs of a lunatic intent on revenge.
Dragon — I knew Lilian was still skittish with men. When she asked for my help in learning self-defense, I’d been surprised. I never counted on those lessons bringing us closer together, or that she’d ask the unthinkable of me. Now she’s carrying my kid, and I f***ed up six ways to Sunday. When she’s kidnapped, I realize it’s time to bring her home. My home. Whatever it takes, I’ll make sure Lilian knows she’s mine. Even if I have to grovel a little.
WARNING: This is a romance with darker themes that may trigger some readers. It has strong language and graphic violence, a heroine who is tougher than she realizes, and an alpha hero who will stop at nothing to make her his. If you’ve read this author’s work before, please be advised Dragon is more violent than the previous books. Guaranteed HEA and no cliffhanger!

Goodreads / Amazon / Barnes & Noble / iBooks / Kobo
—
EXCERPT:
I pressed a hand to my belly as I came to a stoplight. “I promise I will give you the best life I can. No one will ever hurt you.”
Maybe it was stupid. My parents hadn’t been able to protect me any more than I could keep this child out of the wrong hands. Sometimes Fate just liked to fuck you over. I didn’t remember a lot about my parents, and my memories had become fuzzy over the years. I didn’t know if they’d handed me to the cartel, or if I’d been taken without their knowledge. When I’d been rescued, I’d been offered the chance to go home, but I couldn’t face my parents. They were devout Catholics, and even though I’d been violated and not given up my virginity freely, I hadn’t been certain they’d have seen the difference. To them, I still would have sinned.
So I’d come home with the Devil’s Boneyard and Grizzly, a friend from another club, had taken me into his home. He’d shown me papers that said I was legally his adopted daughter, and he’d had my name changed from Lilian Sanchez to Lilian Moore. He’d offered to let me change my first name, but I’d kept it as a reminder of where I’d come from, and what I’d survived.
A horn honked behind me and I startled, realizing the light had changed at some point. I eased through the intersection and headed for the clubhouse. The Prospect at the gate waved me through and I went straight home. My sister’s car was in the driveway and I was reluctant to go inside. I loved Shella, but there were times she could be a bit trying. All I’d wanted was to shower, change into something comfortable, and relax for a while. Now that didn’t seem likely.
I walked inside and shut the door, only to frown when I heard Shella talking to someone. I hadn’t seen our dad’s bike out front, or anyone else’s, so who did she have over? Creeping closer to the sound of her voice, I stopped when I realized she was on the phone.
“I don’t know why she didn’t tell you, Daddy, but I thought you needed to know.”
She was quiet a moment, and I had a sinking suspicion she was discussing me. What exactly had she told Grizzly while I was gone? And then I heard it. The one name that made it very clear what she was doing.
“Dragon. She said it was Dragon.”
Motherfucker!
I could hear my dad roaring on the other end of the line before Shella hung up. Her eyes were wide when she stared at me.
“What did you do?” I demanded.
“I had to tell him! He needs to know that someone hurt you,” she said, her eyes filling with tears.
Sweet baby Jesus. “Shella, I told you I wasn’t hurt. No one forced me. Dragon tried really hard to walk away, but I wouldn’t let him.”
She hadn’t believed me when I’d told her, but I’d thought I made her understand. It seemed I’d been wrong, and now Grizzly knew one of his patched members had knocked up his daughter. This wasn’t going to end well. There was only one thing I could think to do. Leave. If I wasn’t here, then he couldn’t take his fury out on Dragon. Out of sight, out of mind, right?
I raced upstairs and started tossing things into a bag. I didn’t know where I’d go, or what I’d do, but I needed to get out of here before he came home, and I knew I had precious little time. If he was somewhere inside the compound, he could be here any second. Shella was babbling something at me from the hall, but I shoved past her and went back to my car, tossing my bag into the backseat. After I retrieved my purse and keys from the house, I got in and started the engine, checking the gas gauge. Half a tank. That would get me far enough for the moment.
I slammed my foot on the gas, reversing out of the driveway, then shot forward toward the gates. I didn’t see my dad as I neared the front entrance, and didn’t even try to slow down. The poor Prospect rushed to open the gates before I barreled through them, hitting the road that would lead me out of town and to the highway. My heart was racing and my palms were damp.
What the fuck did you just do?
There wasn’t time to second-guess myself. I’d run, and now I needed to see it through.

Author Bio:
Harley is the international bestselling author of the Dixie Reapers and Devil's Boneyard series.
When Harley is writing, her motto is the hotter the better. Off the charts sex, commanding men, and the women who can't deny them. If you want men who talk dirty, are sexy as hell, and take what they want, then you've come to the right place.
Harley Wylde is the "wilder" side of award-winning science fiction/paranormal romance author Jessica Coulter Smith. For fans of Gay Erotic Fantasy Romance, Harley/Jessica also writes as Dulce Dennison.
Check out Harley's other books, and read some random facts about the author, at harleywylde.com.
Follow Harley on Amazon to be notified of new releases, or sign up for her newsletter.