Skip to main content
Labels
Posted by Heidi (ReadingGrrl) May 06, 2020

BOOK REVIEW: Hidden Valley Road: Inside the Mind of an American Family by Robert Kolker 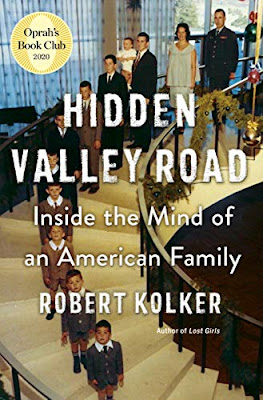 The heartrending story of a midcentury American family with twelve children, six of them diagnosed with schizophrenia, that became science's great hope in the quest to understand the disease.

Don and Mimi Galvin seemed to be living the American dream. After World War II, Don's work with the Air Force brought them to Colorado, where their twelve children perfectly spanned the baby boom: the oldest born in 1945, the youngest in 1965. In those years, there was an established script for a family like the Galvins--aspiration, hard work, upward mobility, domestic harmony--and they worked hard to play their parts. But behind the scenes was a different story: psychological breakdown, sudden shocking violence, hidden abuse. By the mid-1970s, six of the ten Galvin boys, one after another, were diagnosed as schizophrenic. How could all this happen to one family?

What took place inside the house on Hidden Valley Road was so extraordinary that the Galvins became one of the first families to be studied by the National Institute of Mental Health. Their story offers a shadow history of the science of schizophrenia, from the era of institutionalization, lobotomy, and the schizophrenogenic mother to the search for genetic markers for the disease, always amid profound disagreements about the nature of the illness itself. And unbeknownst to the Galvins, samples of their DNA informed decades of genetic research that continues today, offering paths to treatment, prediction, and even eradication of the disease for future generations.

With clarity and compassion, bestselling and award-winning author Robert Kolker uncovers one family's unforgettable legacy of suffering, love, and hope.

I read this for a book club, not my usual pick but it was interesting.  It was a bit of a slow read for me, but still very interesting.  Don & Mimi have 12 children 10 boys and 2 girls.  6 of the 10 boys wind up diagnosed with Schizophrenia, the girls were young when the oldest 2 boys were diagnosed, one was sent away and the other lived through much of the ups and downs, and insanity of what it was like to live with someone having delusions. The amount of trauma that this family has experienced is beyond imagining but this story is told with compassion.

Back when the first son was diagnosed the belief was that it was the mothers fault, now years later it seems like they sort of understand the disease but no pharmaceutical company really wants to go all in to help find a "cure" or a better drug. This book mainly focuses on the family but is interwoven with the research and researchers who made studying this disease their life work.  The hardest part of the research sections was seeing how pharmaceutical companies are really in it for the money and not for the good of the people and how big Pharma really drives so much of the research or buries it. Finally after many genetic studies including this family they have determined a genetic component to this disease but it still feels like they don't know for sure what triggers it or really how to treat it.

The trauma for the Galvins didn't stop at just the immediate family as it seems that those who went on to marry and have kids may have been so scared of their kids showing signs that they made them paranoid about it as well. It is very interesting to see how the "healthy kids" survived and moved forward with their lives. Many of them wanting nothing to do with the sick family members still alive  and many of them trying to lead more quiet lifestyles.

It seems to me that even if this family hadn't been sidetracked by this vicious disease they may not have faired entirely well.  There is a level of disfunction in this family that is mind boggling.  A basically absent father and a mother whose world was her children but yearned for the influential life she had led as a child.