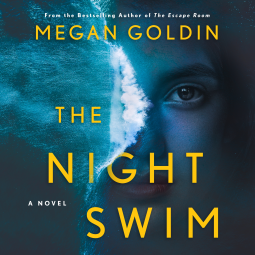 In The Night Swim, a new thriller from Megan Goldin, author of the “gripping and unforgettable” (Harlen Coben) The Escape Room, a true crime podcast host covering a controversial trial finds herself drawn deep into a small town’s dark past and a brutal crime that took place there years before.

Ever since her true-crime podcast became an overnight sensation and set an innocent man free, Rachel Krall has become a household name—and the last hope for people seeking justice. But she’s used to being recognized for her voice, not her face. Which makes it all the more unsettling when she finds a note on her car windshield, addressed to her, begging for help.

The new season of Rachel's podcast has brought her to a small town being torn apart by a devastating rape trial. A local golden boy, a swimmer destined for Olympic greatness, has been accused of raping the beloved granddaughter of the police chief. Under pressure to make Season 3 a success, Rachel throws herself into her investigation—but the mysterious letters keep coming. Someone is following her, and she won’t stop until Rachel finds out what happened to her sister twenty-five years ago. Officially, Jenny Stills tragically drowned, but the letters insist she was murdered—and when Rachel starts asking questions, nobody in town wants to answer. The past and present start to collide as Rachel uncovers startling connections between the two cases—and a revelation that will change the course of the trial and the lives of everyone involved.

Rachel is in a small town for the trial of a rich well loved jock who is being accused of rape.  She also is being stalked by a woman named Hannah who asks for Rachels help in finding out who killed her sister many years ago in the same small town.  At first Rachel isn't sure about helping the elusive Hannah but the more she digs in about Jenny Stills death the more road blocks she hits and her investigative antenna are going crazy.
This is a good audio book because the segments of Rachels podcast actually sound like listening to a podcast, with background music and all.  Its an interesting conundrum.  Should the golden boy lose his whole life on an accusation? Is the victim lying because she regrets saying yes? Is it right that an alleged rape victim is often put on the stand to be grilled over and over about what happened trying to proved beyond a reasonable doubt that she was raped having to live the whole trauma over again while the alleged rapist is afforded the ability to not take the stand? These are the questions raised in this book.
When all seems lost it is Rachel's quick mind that may pull the ace that helps bring the truth to light, and in doing so also shed light on a case that happened long ago to a young girl the town wishes it could forget.
The narration was really well done and I like the back and forth between the podcast and the real action of the story.  There is a lot going on but it was easy to follow.  I really enjoyed the mystery and Jenny Sills murderer is not at all who I was expecting.

Follow my blog with Bloglovin
Disclaimer: I received this book through netgalley.com from the publisher in exchange for an honest review.
Labels: audio book Megan Goldin netgalley The Night Swim