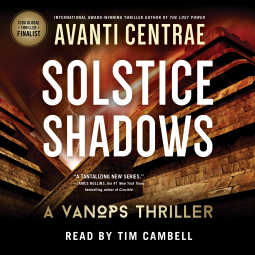 A computer-app designer. An encrypted relic. Can she decipher the dangerous code before extremists trigger a high-tech apocalypse?
Software expert Maddy Marshall isn't sure she's ready for a hazardous role in black ops. But when an armed Russian thief makes off with a rare ancient star chart, the aikido black belt has no choice but to join her VanOps boyfriend and twin brother in the pursuit. If her royal Spanish family legends are true, the chart leads to a superconductive treasure trove capable of powering the ultimate instrument of global destruction.
Setting off on a mad dash to uncover the secrets of a Mexican archeoastronomy site, she and the VanOps team unearth a clue dating back to biblical times. But as they race across the globe to Morocco, Turkey, and Egypt, they find themselves only a half-step ahead of sinister assassins.
Before millions die at the hands of an anti-American Russian government, can Maddy crack the secret code?

This is supposed to be a stand alone book in this series however I did feel there was a bit of a learning curve in the beginning of this book. This book is a fast paced action thriller. On a quest to find a celestial map that leads to super conductive power source that could give whoever gets it first a way to take over the world.  On a race through the Middle East Maddie tries to reconcile her past transgressions, her feelings toward her new man, her feelings for her old man, and if she would be putting the boy she is trying to adopt in danger or would be protecting him.  Maddie is also part of a secret operation that seems connected to the one trying to recruit her.

This is an interesting, Indian Jones, National Treasure type book, filled with mythology, biblical references, and celestial powers that could save or destroy the world. The narrator was great and really carried the book and all the action.  I really enjoyed this book.