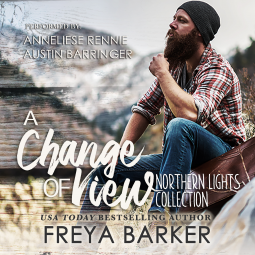 What if, one morning, you look in the mirror and no longer recognize the person looking back?

When Leelo can no longer identify herself by the roles that once defined her, it's both terrifying and liberating. Oh, she feels the loss, grief, and the anger, but when she inherits property up north, she jumps at the promise of freedom and independence. Yet, not everyone in her new community is what they seem, starting with the surly mountain man down the road.

As owner of the local fishing lodge, Roar is content with his everyday life. And the older he gets, the less he appreciates change. So, when a blue-haired, tattooed "city girl" moves into the old motel, shaking up his daily routine, he’s none too pleased. Still, something about the woman’s easy smile and almost reckless grit has him step up as her keeper.

This was a great romance that shows love and desire don't end after 40. When Leelo takes over her Uncles motel and bar that has fallen into disrepair, she feels daunted by the task of the renovation but ready for the change.  After a failed marriage to a manipulative verbally abusive man and an estranged relationship with her kids this move is just what Leelo needs.

Roar owns the lodge down the road from the motel, alone since his marriage ended due to infidelity Roar puts all his energy into helping his neighbors and his mom while trying to hold himself together.  Several tours in Afghanistan, the loss of his baby, the infidelity of his wife and the loss of a best friend have left him raw and closed off until he sees the tattooed blue haired woman determined to make a go of the motel next door.

This romance combines with a mystery as the lodge, and the motel keep getting vandalized and Leelo doesn't seem to be able to catch up.  As despair starts to settle in she also has feelings blossoming for the handsome cranky neighbor next door.

This is turning out to be an excellent series.  I wasn't sure about the female narrator at first but her voice grew on me.

Disclaimer: I received this book through netgalley.com from the publisher in exchange for an honest review.
Labels: A Change of View audiobook Freya Barker netgalley Northern Lights Collection