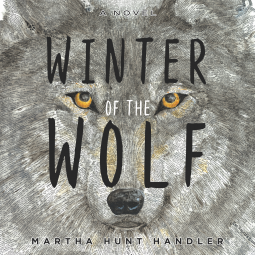 An exploration in grief, suicide, spiritualism, and Inuit culture, Winter of the Wolf follows Bean, an empathic and spiritually evolved 15-year-old, who is determined to unravel the mystery of her brother Sam’s death. Though all evidence points to a suicide, her heart and intuition compel her to dig deeper. With help from her friend Julie, they retrace Sam’s steps, delve into his Inuit beliefs, and reconnect with their spiritual beliefs to uncover clues beyond material understanding.

Both tragic and heartwarming, this twisting novel draws you into Bean's world as she struggles with grief, navigates high school dramas, and learns to open her heart in order to see the true nature of the people around her. Winter of the Wolf is about seeking the truth - no matter how painful - in order to see the full picture.

This book evoked a lot of strong emotions.  It was heart wrenching going through the grieving process with this family.  Sam, one of 4 children is found dead, the police and the rest of the family believes that it was a suicide but Bean who was closest to her brother thinks it was something else.  As she struggles with what happened and tries to process through the grief she enlist the help of her best friend.  Through interviews with Sams friends Bean learns more about Sam but she still doesn't believe he committed suicide.  Sam had strong Inuit beliefs and she can't reconcile them with what happened.
Bean's family is also struggling, her father who freaked out on both Sam and Bean right before this happened is trying to push everything away, her mother won't get out of bed and isn't taking the medication she was prescribed, her brothers seem to be going about their lives. During her investigation Bean learns more about her family and this builds a stronger bond between them all.
Through investigating Sam and learning more about his beliefs and other spiritual practices the girls decide to perform a shamanic ritual that they believe will help them know if Sam is still with them.  This ceremony is beautiful and the aftermath brings the family even closer.
I really liked this book and the big reveal at the end.  While I didn't see it coming I agree it is a very under reported problem.  If you have a teen who is going to read this book I would suggest reading it first or at least at the same time so that a conversation can happen about this reveal.  Regardless of how difficult that conversation may be it is important.

Follow my blog with Bloglovin
Disclaimer: I received this book through netgalley.com from the publisher in exchange for an honest review.
Labels: Martha Hunt Handler netgalley Winter of the Wolf ya