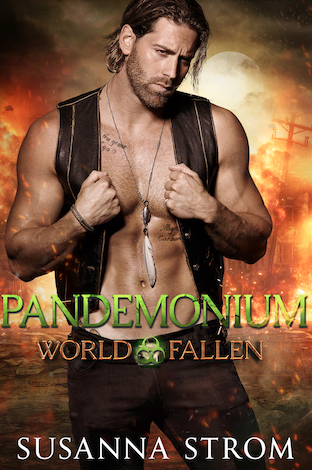 
The intersection of danger and desire
Kenzie Dunwitty is laser focused on finishing college and landing a job that will give her the security she craves. With a deadline looming, she disconnects to finish a paper. When she emerges, the world is sliding into chaos. Overnight, a simple flu virus has morphed into a lethal, worldwide pandemic. Kenzie seeks refuge at her prepper cousin’s compound and finds herself face to face with a deadly sexy stranger.
Ripper Solis, ex-Army Ranger and current enforcer for an outlaw motorcycle club, protects the people he considers his own. He’s not a nice guy. Not a man that a woman turns to for support and comfort. Not the bad boy hero in the romance novels Kenzie’s escaped into for years. Or is he?
As law and order break down, and the ever-present threat of the virus hangs over their heads, Ripper’s strength and resourcefulness offer an irresistible allure. Sexy and commanding, he’s everything she ever wanted. Their chemistry is combustible.
Will love save the day, or will the perilous new world obliterate their future?
Pandemonium is the first novel in the exciting new World Fallen series. Maelstrom, book two of the World Fallen series, coming October 27.

Goodreads / Amazon / Barnes & Noble / iBooks / Kobo
—
CHAPTER ONE:
Kenzie
I slicked my wet hair back from my face and grabbed the towel that I’d slung over the shower curtain rod. A shadow fell across the plastic curtain. I glanced down at the three-inch gap between the bottom of the waterproof fabric and the floor. Bare feet—the toenails painted a bright apple green—shambled past the shower stall.
Jeez. At 3 a.m. on a Sunday morning, I’d figured I was alone in the big, communal bathroom. Whoever walked by was ignoring the unspoken rules of dorm life, not to mention common sense. You didn’t sneak up on somebody in the middle of the night. You called out “Coming through” or “Hi” so you wouldn’t startle them or look like a creeper. And nobody in their right mind walked across a public bathroom with bare feet. Hadn’t they heard of foot fungus?
Muttering to myself, I wrapped the towel around my body.
The overhead lights flicked off and plunged the room into semidarkness. Only a narrow shaft of light from the hallway pierced the gloom. Stumbling backward on the slippery tiles, I almost fell out of my flip-flops. I groped for the walls, my heart thumping in my chest.
“Hey! Turn the lights back on.”
Most people would have apologized and flipped the switch. Not my mystery intruder. She shuffled down the hall, leaving me alone in the dark.
“Thanks, asshole.” She was probably the same type of joker who swiped my towel midshower during my first week in the dorm. Swathed in the flimsy shower curtain, I’d done my own version of the walk of shame back to my room.
That was bad. This was worse.
Squeezing my eyelids shut, I leaned back against the wall and sucked in a calming breath. Okay. If I waited a minute or two for my eyes to adjust, I should be able to navigate my way to the door, then out into the well-lit hallway. No need to freak out; I’d crossed this bathroom at least a thousand times. I counted backward from sixty, opened my lids, and swept aside the shower curtain.
Eyes on the prize.
The hallway light beckoned. I kept my gaze laser-focused on it, ignoring the shadows that hovered in my peripheral vision as I stumbled toward the open door. I stuck my head into the hall and looked in both directions. Green-toenail girl was nowhere in sight.
I marched down the long corridor, past a dozen dark, silent rooms. Lights flickered from the TV lounge. I paused in the doorway. One of those 1950s alien invasion movies that Uncle Mel and I used to watch played on the big screen. Smiling at the memory, I stepped into the room and scanned the sofas and chairs for signs of life. The place appeared empty.
Just last week the perky resident assistant had sent out a memo reminding people to turn off the big TV when they were done watching it, part of the university’s green initiatives. I sighed. If Janie found the TV on when she made her rounds in the morning, she’d probably issue another flurry of memos. Picking up the remote from a table, I clicked off the television and turned to head back to my room.
Somebody groaned, and I jumped backward. Who was that? My gaze darted around the room, finally landing on a figure sprawled across a sofa. Guess I should have looked more closely instead of dismissing the lump as a pile of pillows.
“Hi,” I called out.
Another groan.
With halting steps, I approached the sofa. Long, curly red hair spilled across a cushion and partially obscured her face. It had to be Rachel what’s-her-name from down the hall. One night last month, I found her at 2 a.m.—key in hand and reeking of tequila—passed out in the hallway outside her door.
“Hey, Rachel. You need help getting to your room?”
She mumbled her response, the words lost behind the tangle of hair.
“You okay?” I leaned over and brushed the hair back from her pale face. Her eyes fluttered open, and she squinted up at me. Her lips parted and she burped, spewing out a rancid cloud of rumtainted vapor.
“Shit!” I staggered backward, lifting a corner of the towel to hold over my nose.
Rachel’s chest hitched and she retched.
“No, you don’t.” I rolled her on her side, jammed a pillow behind her back, then pulled a small wastebasket close to the sofa, positioning it next to her head.
I was willing to play good Samaritan to keep the girl from choking if she puked, but if she was dead drunk, there was no way I could carry her back to her room. She’d have to sleep it off in the TV lounge.
“You want some water?” I offered.
“Huh-uh.” She shook her head, then raised a hand to her temple, groaning again. I bet the rum was giving her one hell of a headache.
“You sure? How about an aspirin?”
“Wanna sleep,” she slurred.
My conscience clear, I kept watch over her for another few minutes, until her dry heaves subsided, and she drifted off to sleep.
First the green-toenail girl and now Rachel; I don’t usually see this much excitement in the middle of the night.
Must be a full moon. 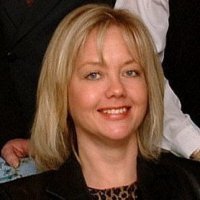 Author Bio:
With the publication of Pandemonium, Susanna Strom is branching out into an entirely new variety of romance. Susanna loves to read--and write--stories full of complex characters who find love, hope and connection while navigating through a challenging new world. Pandemonium is her first foray in apocalyptic/dystopian romance, but it definitely won't be her last.