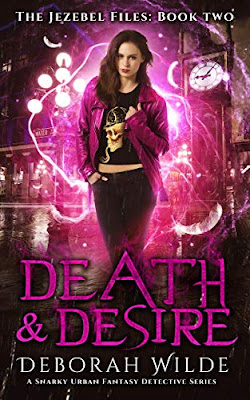 When Ash is hired to solve her first murder, it seems like a perfectly normal, open-and-shut case of family feuds and bad blood. Until Ash discovers an evil magical artifact and her lead suspect is of the winged, white-robed, celestial variety. As if that weren't bad enough, if she can't find the perpetrator quickly, fourteen vials of lethal, ghostly magic will be sold to the highest bidder.

Her quest to figure out her Jezebel powers and find the shadowy organization responsible for stripping teens of their magic isn't going any smoother, either. Can't a girl just pursue her dream career without getting caught up in a mysterious destiny? Or, for that matter, playing a dangerous Sherlock-Moriarty game with the infuriatingly hot alpha male in charge of Vancouver's magical community?

But when Ash accidentally crosses the cunning and deadly Queen of Hearts, ruler of the magic black market, all those cases may go unresolved.

With the clock ticking, it’ll take all of Ash’s intelligence to survive with her moral center–and her head–intact.

The game is afoot and failure is not an option.

Ash is back on the case only this time its to help solve a murder or is it? Her biggest clue is a feather that seems to compel who ever is near it with their deepest desire.  For Ash though it makes her magic crave it.  The victims families are convinced it was an Angel of Death but Ash isn't so sure.

Ash is also trying to navigate her relationship with her mother, one of the heads of the political party calling for the elimination of the magical houses, as well as figure out what in fact a Jezebel is and what her purpose may be.

Ash's love hate relationship with house head Levi is also front and center as she navigates politics, magic and people hell bent on telling her she isn't up to her job.  But is her destiny to be a PI or is it something else entirely?

I didn't like this book as much as the last one but it did have its good spots.  After a while the push me pull me type of relationship that Levi and Ash have stars to get old for me.  I did find the whole Jezebel thing interesting and I love when Ash bests people who keep underestimating her.  Overall I liked the book and this series.  I will be downloading the 3rd book soon.