BOOK REVIEW: Into the Fire (Orphan X #5) by Gregg Hurwitz 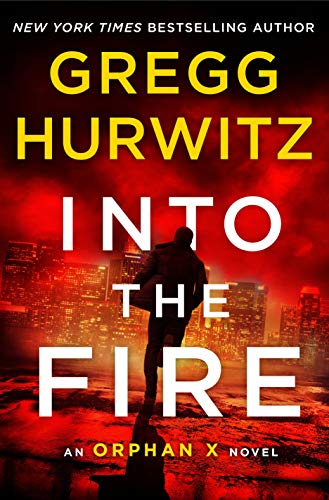 Evan Smoak lives by his own code.

Once he was known as Orphan X. Trained as an off-the-books government assassin and spoken about only in whispers, Evan Smoak was one of the most talented – and most feared – men in the Program. But he broke free and reinvented himself as The Nowhere Man, a figure shrouded in mystery, known for helping the truly desperate.

If anyone is truly desperate, it’s Max Merriweather.

Max is at the end of his rope. His cousin has been brutally murdered, leaving Max an envelope that contains nothing but a mysterious key. However, someone really wants that key, badly enough that Max – and anyone he turns to – is in deadly danger. What seems like a simple job for The Nowhere Man turns out to be anything but. Behind every threat he takes out, a deadlier one emerges and Evan Smoak must put himself in greater danger than ever before as he heads once more Into The Fire.

Evan finally has people off his back and doesn't have to keep looking over his shoulder.  Now the question is what to do.  He decides to take one more Nowhere Man assignment and then call it quits.  Of course what he thinks is a quick low level job turns out to be anything but and he keeps finding himself one step behind.
I really love these books and Evan.  I really want him to finally be able to settle down but lets face it I don't think that will ever happen entirely.  What would be nice is if he could have a relationship with his neighbor.
I love his interaction with Joey, the young 16 year old hacker that he has saved from the Orphan program and taken under his wing.  He loves her like a daughter but is fearful to admit it to himself.
These are books that you really should read the whole series to understand what is going on.  They are not stand alone books.
I do feel in this book Evan is looking more deeply at himself, his wants and what made him who he is.  He seems to have a soft spot for Max seeing a bit of himself in him.  I really like their interaction and while Max seems like the ultimate fuck up he turns out to be anything but.

Discover other books or products I like: https://www.amazon.com/shop/readinggrrl
Labels: Gregg Hurwitz Into the Fire netgalley Orphan X