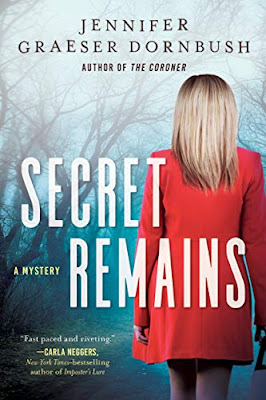 It's been 12 years since Sandi Parkman went missing after being dropped off at home by her schoolmate, Nick Larson, now the Sheriff of Freeport, Michigan. When a construction crew unearths Sandi's bones--along with Nick's letterman jacket and one of his hairs--Nick becomes suspect number one in the murder.

Dr. Emily Hartford, the daughter of Freeport's medical examiner, is called in to investigate, but the case is about to get personal. Nick was Emily's high school love, and now she has to either clear his name--or contend that he's the killer. As she delves into the case, a host of other suspects emerge: a coterie of Nick's jock friends from high school; Sandi's sister, Tiffany, now a dancer at a local strip club; and James VanDerMuellen, a trust funder who's recently returned to Freeport.

As the autumn skies darken over Freeport and the holiday season looms, Emily must sift through more than Sandi's brittle bones to solve the case. Can she exonerate Nick--and rekindle their long-smoldering romance? The race is on to find the truth.

Swept up in a new mystery Emily finds herself trying to figure out where she wants to be.  Does she want to go back to her fiancé and resume her surgery rotation, does she want to stay in Freeport and take over for her father as the new medical examiner  and rekindle her relationship with Nick or does she want to start teaching at a university?
Emily was starting to have serious doubts about her future and what options she may have, now it seems like she has too many options.  If that isn't enough to keep her occupied the bones of a young woman are found and all the evidence is pointing to Nick. Can she figure out what really happened or does she believe it really was Nick that murdered the young woman.  When a pact made by teenagers comes back to bite them in their adult years maybe its time for them to all come clean.
I really love this series and I hope there is more to come.  I don't think Emily's story is finished yet even though this book didn't end on a cliffhanger.  Well developed characters and a fast paced mystery this is a good read.

Discover other books or products I like: https://www.amazon.com/shop/readinggrrl
Labels: Jennifer Graeser Dornbush Secret Remains The Coroner