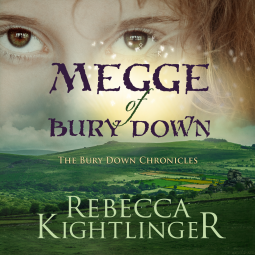 In 13th century Cornwall, young Megge has just come of age to be apprenticed to her mother, the healer of Bury Down. But first, she must accept and vow to protect The Book of Seasons, an ancient tome that holds life-sustaining power harnessed centuries earlier by Murga, the first seer Bury Down.

At her vow taking ceremony, yearning to accept her inheritance and take her place in her family's long line of healers and seers, Megge reaches for the book. When she touches it, she feels something writhe within it and becomes convinced that the book is cursed and that she too will be cursed if she accepts it.

Despite her mother's pleas to protect the book from the one who would usurp its power, Megge refuses to even look at it. But when a Blackfriar abbot arrives in the village claiming to be under orders to root out heretics and imprisons the healer for refusing to turn over her "demon's book", will Megge finally summon the courage to take that vow?

Megge wants nothing to do with her families legacy.  After she touched her mothers Book of Seasons she heard someone whisper "murderer" and she has refused to touch it ever since. But it is always there taunting her, talking to her. So she tries instead to focuses on herding and learning to weave and spin wool.   Her Aunt has a Book of Time both books handed down through generations and protected by a guardian who can unite both books. But Megge is frightened of them both, she seems to have a natural affinity for healing and helping her mother tend to the sick but Megge continues to refuse to touch or even look on her mothers book.  She is worried what it would mean for her to take it up.  When an Abbot comes and starts asking questions about her family she knows they are all in danger but doesn't know what to do.
The narrator has a wonderful lilting brogue that gives life to this story of a young Megge and her family.  Steeped in superstition and folklore, this is the perfect setting for this tale of a family cursed and a young girl with a huge weight thrust upon her and her not sure if she wants or can handle it.
I thought the book was a bit slow to start but then got sucked into the story and very much enjoyed it.  There are a lot of characters and some have lived before thus having 2 different names so you really need to pay attention. I was a little taken aback by how abruptly this first book ended but it did make me look forward to the 2nd in the series.

Discover other books or products I like: https://www.amazon.com/shop/readinggrrl
Labels: audiobook bury down chronicles fantasy Megge of Bury Down netgalley Rebecca Kightlinger Witches