ARC AUDIOBOOK REVIEW: The Lady of the Cliffs (The Bury Down Chronicles #2) by Rebecca Kightlinger 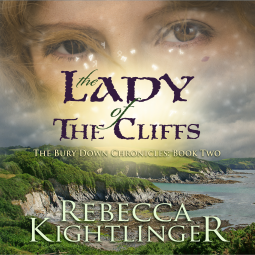 Cornwall, 1285 CE. Now nearly 17, Megge and Brighida must endure another brutal loss. And as they perform the rites of transition that precede a burial, Megge accepts a daunting new charge that carries consequences not even her cousin the seer can predict. It brings visions. Dreams. And voices that come to her as she goes about her work.

A silken voice beckons her back to the cliffs of Kernow, which she has seen only in dreams. A commanding voice orders her back. And the menacing voice she’s heard since she was a girl is now ever at her ear, bringing anew a haunting meaning to her grandmother’s words, “You’re never alone."

But only when the tales of an old woman, a stranger to Bury Down, echo those voices and conjure those cliffs does Megge embark on a journey that leads to a secluded cove they call The Sorrows and a destiny none of the women of Bury Down could have foreseen.

This continues the story of Megge and her cousin as well as the Book of Seasons and the Book of Time. Still getting over the death of her mother and now her Aunt Megge has decided to take up her mothers book. However Megge can't read all of the book but after studying with her cousin learns that she doesn't really need to read it to understand it, she knows it.
Vowing to end the trouble with the dark spirit that haunts her through time to try to usurp the books and steal their power Megge must struggle with what to do. Should she united the books and accept the consequences or should they remain separate.  It until she gets to the Cliffs that she understands her task and has to make a decision.
Same narrators before, which was fabulous.  I really enjoyed this second book which brought so much of his story to light.  The twists, turns and lies that created so many deaths is finally revealed.  I was sucked into this book immediately and found myself on the edge of my seat a time or two.
This is definitely a well developed saga and I was happy to get to read it.

Discover other books or products I like: https://www.amazon.com/shop/readinggrrl
Labels: audiobook bury down chronicles Historical Fantasy netgalley Rebecca Kightlinger The Lady of the Cliffs