ARC BOOK REVIEW: Take It Back by Kia Abdullah 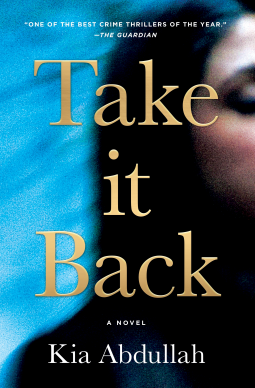 One victim.
Four accused.
Who is telling the truth?

Zara Kaleel, one of London's brightest legal minds, shattered the expectations placed on her by her family and forged a brilliant legal career. But her decisions came at a high cost, and now, battling her own demons, she has exchanged her high profile career for a job at a sexual assault center, helping victims who need her the most. Victims like Jodie Wolfe.

When Jodie, a sixteen-year-old girl with facial deformities, accuses four boys in her class of an unthinkable crime, the community is torn apart. After all, these four teenage defendants are from hard-working immigrant families and they all have proven alibis. Even Jodie's best friend doesn't believe her.

But Zara does—and she is determined to fight for Jodie—to find the truth in the face of public outcry. And as issues of sex, race and social justice collide, the most explosive criminal trial of the year builds to a shocking conclusion.

It wasn't until after I started writing this post that I realized that this is actually a regular length book.  To me it went so fast I felt like I had just started it and then it ended.  So kudos to Ms. Abdullah for creating a book that sucked me in so quickly and held my attention so much that I didn't realize I had just read over 300 pages instead I thought it was closer to 100!
This is a complex book with many many parts.  There is the rape aspect, who do you believe, the good looking, studious, religious boys or the deformed poor white girl with a drunk mother. Do we blame the victim for putting herself in the situation or do we condemn the boys for their actions?
Then there is the religious aspect, do you side with your religion just because they are oppressed and seen as villains a lot of the time or do you stand for justice? How much influence should your family and community have on you and your job? Will the boys be convicted simply because of their religion?
And lastly the racial bias that pervades so many countries, do the boys have less of a chance at a fair trial because they are brown?  Will they be convicted on their skin tone or because the jury believes they actually committed the crime? Did their prejudices place into it? What about the fact that the girl in question has deformities? Does this take away from her honesty?
There are so many questions and aspects to this book it is hard to review. The main character Zara is a flawed character who seems at odds with her religion but also at odds with herself.
I will have to say I didn't see the end coming.  I'm not sure I favor ending things so open ended leaving the reader to figure out what the next move will be but I will give her props for the growth of the characters.  I think this book is going to stick with me for a while and would make an excellent conversation piece for a book club.  I look forward to seeing what is next for this author.

Discover other books or products I like: https://www.amazon.com/shop/readinggrrl
Labels: Islam kia Abdullah mystery netgalley rape religion take it back thriller