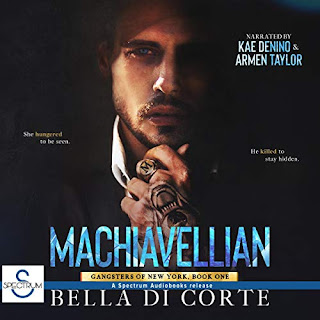 I hungered to be seen.

There were three things I knew about Capo Macchiavello:

And he wanted me as his wife. A simple arrangement - you do for me, I do for you. Nothing owed, no expectations. Except for one: never leave.

Life was never that simple, though. By the age of 21, I was parentless, jobless, and homeless, and I had come to learn the hard way that nothing was ever free. Even kindness comes with strings.

Capo might've been the only man to ever see me, but I had made a vow to myself: I would never owe anyone anything. Most of all, the man I called boss.

I killed to stay hidden.

Mariposa Flores thought she owed nothing to no one, but she owed everything...to me, the ghost the world had once called the Machiavellian Prince of New York.

Mariposa Flores is a strong female character.  Her parents were killed when she was small and a stranger saved her, however when her foster parents also died and she was then sent to a new home things changed.  She found herself fending off the father and decided to take her chances on the street.  Always one step away from disaster, one step away from having to sell herself to stay alive.  Desperate she finds an invitation to a job event that could change her life.  Deciding it may be her last hope she decides she will do whatever it takes to get this job.

Capo was once a prince now he is a ghost.  Protected by one of the most powerful mafia families in New York he has made his way in life making questionable decisions but no one seems to know much about him. He becomes enamored of a young homeless woman outside his restaurant one evening but despite feeling a strange pull doesn't engage her he has to keep his mind focused.  He needs to take down one of the powerful and ruthless mafia families.

Thrown together by fate Capo and Mariposa's lives are so intertwined its no wonder they are pulled toward each other.  This is a good romantic suspense book, with well developed characters and a somewhat realistic story line.  I really enjoyed it more than I thought I would. The narrators were both excellent.

Disclaimer: I received this book through netgalley.com from the publisher in exchange for an honest review.
Labels: Bella Di Corte Gangsters of New York Machavellian mafia netgalley Romantic Suspense