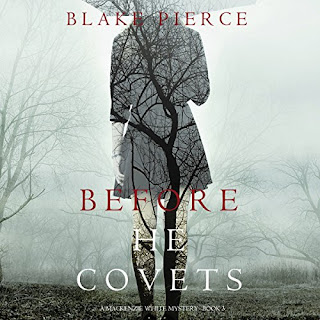 In Before He Covets, newly minted FBI agent Mackenzie White graduates the FBI Academy in Quantico only to find herself thrown into an urgent serial killer case. Women are turning up dead while camping in a remote national park in West Virginia. Yet the park is vast, and no connection can be found between them.

At the same time, Mackenzie receives a call from Nebraska urging her to come home. After many years, a new clue has surfaced about her father's murder. The case no longer cold, Mackenzie desperately needs to help solve it.

But the FBI's killer is ratcheting up, and there is no time for distraction as more women turn up missing in the psychological game of cat-and-mouse that follows. This killer is more diabolical - and smarter - than Mackenzie could have imagined. As she goes down a road she fears to travel - deep into her own psyche - she finds a double twist waiting for her that even she could not expect.

I am really enjoying MacKenzies evolution from small time cop to FBI, she is still fresh, she is still new and she still makes mistakes. Paired again with a senior FBI agent she has worked with before Mackenzie is still finding it hard to distance herself from her past even while working on a current case. People are showing up mutilated in horrific ways, their bodies spread out in the forest with no seeming connection to each other Mackenzie finds herself trying to appease riled up police, forest rangers and state cops.
And if that isn't enough Mackenzie gets a surprise when she receives a call about a similarity that pops up that reopens her fathers cold case. Now torn between finding who is killing these people in the woods and figuring out what happened to her father Mackenzie struggles with focus.
I'm a big Blake Pierce fan and while the stories do seem to be fit a formula they are still intriguing and there is still so much to learn about Mackenzie. I think of these books as some sort of twisted mind candy. They keep me thinking but not too much.

Discover other books or products I like: https://www.amazon.com/shop/readinggrrl
Labels: audio book Before He Covets Blake Pierce Hoopla Mackenzie white mystery