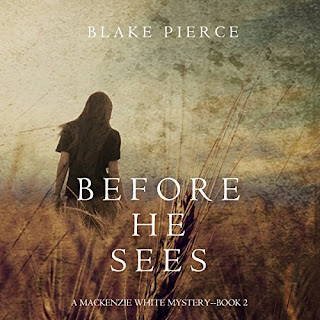 FBI agent-in-training Mackenzie White struggles to make her mark in the FBI Academy in Quantico, trying to prove herself as a woman and as a transplant from Nebraska. Hoping she has what it takes to become an FBI agent and leave her life in the Midwest behind for good, Mackenzie just wants to keep a low profile and impress her superiors.

But all that changes when the body of a woman is found in a garbage dump. The murder bears shocking similarities to the Scarecrow Killer - the case that made Mackenzie famous in Nebraska - and in the frantic race against time to stop a new serial killer, the FBI decides to break protocol and give Mackenzie a chance on the case.

It is Mackenzie's big break, her chance to impress the FBI - but the stakes have never been higher. Not everyone wants her on the case, and everything she touches seems to go wrong. As the pressure mounts and the killer strikes again, Mackenzie finds herself as a lone voice in a sea of experienced agents, and she soon realizes she is in way over her head. Her entire future with the FBI is in jeopardy.

As tough and determined as Mackenzie is, as brilliant as she is in hunting down killers, this new case proves an impossible riddle, something just beyond her reach. She may not even have time to crack it as her own life falls apart around her.

Mackenzie has now joined the FBI leaving behind her small town in Nebraska. She like the FBI academy and is determined to do well.  Coming off the Scarecrow killer case Mackenzie's reputation has proceeded her to the training academy and students are talking about how she may have gotten in.
Close to graduation Mackenzie is approached and asked to help out in a serial killer case that seems to be escalating with no leads.  This could make or break Mackenzies time at the FBI so she has to get it right.
I appreciate Mackenzies eagerness to be the best even when she does some of the stupidest law enforcement stuff I've ever read.  Why she always thinks she needs to go investigation on her own is beyond me.  Well plotted, creepy and fast paced this is another great read in this series.  I love how many of Blake's criminals are all so normal...not over the top and the situations that victims are in are so mundane we would rarely give them a second thought.  I think the biggest take away from any of these books is trust your gut! Looking forward to more in this series.