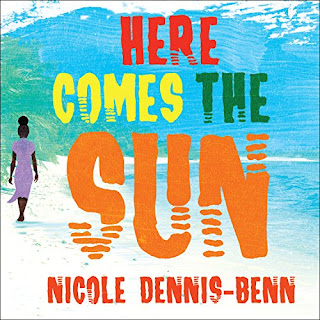 At an opulent resort in Montego Bay, Margot hustles to send her younger sister, Thandi, to school. Taught as a girl to trade her sexuality for survival, Margot is ruthlessly determined to shield Thandi from the same fate. When plans for a new hotel threaten their village, Margot sees not only an opportunity for her own financial independence but also perhaps a chance to admit a shocking secret: her forbidden love for another woman. As they face the impending destruction of their community, each woman - fighting to balance the burdens she shoulders with the freedom she craves - must confront long-hidden scars.

When we think of the Caribbean we think of blue waters, sun and relaxation but for the people who live there it is about survival.  The author has penned a beautiful story where the socio-economic lens is turned on Jamaica itself although you could probably substitute just about any Caribbean island. Among the all inclusive resorts are the small villages where the people of Jamaica live.  Struggling to survive on sales to tourists or turned into glorified maids working in the resorts spread all over the beaches catering to the white people who flock there for some fun and occasionally some extra curricular activities with someone exotic and local.
Margot was taught at an early age that the only way to make any money was to use her body.  Determined not to let her baby sister have the same fate she struggles to put her through school, working in resorts and selling her body to high paying customers.  All the while wishing she could feel something, have something for herself. But what is that? She struggles with what she really desires, scared of it. But what will she sacrifice for dreams? Her community? Her love?
Verdine moved back to Jamaica to care for her mother.  Now that her mother is gone she still stays almost as a penance for not being the daughter her mother wanted.  Outed as a lesbian when she was younger she was shipped off to England so her mother could escape the shame. Now that she is back she is subjected to dead animals on her property, whispers about her heathen ways, but yet she stays.  Now she struggles with her love for Margot and her feelings of failure to her family and to herself.  Scared she will one day be killed for who she loves she still remains trapped by her past.
Thandi, Margot's sister is struggling, her skin is dark and she knows that only lighter skinned girls are considered pretty. She is good in school but dreams of painting and falling in love.  She feels the pressure from her sister and her mother to do something different with her life but no one asked her what she wants, what her dreams are.  Except one young man who would do anything for Thandi and believes she can be anything she wants.
This is a complicated story not just about class difference but also about the rapid homophobia that to this day causes so many people to die, or be maimed in unspeakable ways set among the backdrop of the beautiful Caribbean sky. Narrated by Bahni Turpin who showcases the singing Jamaican accent filled me with joy and sorrow.  So many people go to these resorts or take cruises and say they have been to Jamaica but have they? When you only see the walls of a white washed resort can you really say you've been to Jamaica? The rhythm of the dialect, the small run down shacks they live in, the struggle to put food on the table, haggling for pennies from rich tourists who don't want to spend too much on souvenirs. The islands are filled with these stories, the gated communities where the rich white people live and the poor communities where the native people live, working hard for for very little knowing they are completely replaceable and that there are at least 10 people waiting to step in and take their spot if they do something wrong or perceived to be wrong.