BOOK REVIEW: The Sun Down Motel by Simone St. James 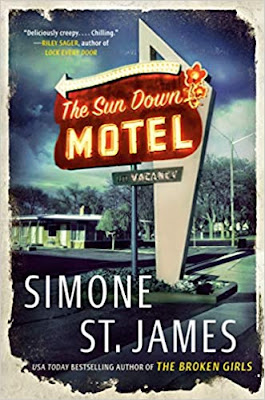 Upstate New York, 1982. Viv Delaney wants to move to New York City, and to help pay for it she takes a job as the night clerk at the Sun Down Motel in Fell, New York. But something isnʼt right at the motel, something haunting and scary.

Upstate New York, 2017. Carly Kirk has never been able to let go of the story of her aunt Viv, who mysteriously disappeared from the Sun Down before she was born. She decides to move to Fell and visit the motel, where she quickly learns that nothing has changed since 1982. And she soon finds herself ensnared in the same mysteries that claimed her aunt.

I had no idea what to expect with this but got the recommendation on a facebook book group.  I loved it.  Full of mystery and suspense. Told in two different time periods.  In 1982, Viv has left home hoping to becoming an actress in NYC but winds up in Fell, NY working nights at a motel. Fell turns out to be a strange little town with a very high murder rate and the motel seems to be inhabited by ghosts.  In 2017 Carly goes to Fell, NY trying to uncover what happened to her aunt Viv who disappeared in 1982.  As Carly retraces Viv's footsteps, even getting a job at the Sundown Motel working nights she also uncovers some strange mysteries residing in Fell.  With help from some unlikely friends Carly hopes to finally get closure on what happened to her aunt.
Filled with cautionary tales that people tell women to "protect" them, there seems to be an underlying theme of empowerment of women.  Viv isn't taken seriously because she is a young woman, Alma the nigh shift police officer isn't taken seriously because she is a woman.  Even the murder victims can't catch a break, the reports on their deaths and their lives were written depending on how they behaved in life, either they were saints or sluts and no matter what their deaths didn't seem to warrant to much investigation.
This is a multilayered book disguised as a ghost story. Well written, fast paced and spooky I was pleasantly surprised by this book

Discover other books or products I like: https://www.amazon.com/shop/readinggrrl
Labels: Ghost Simone StJames Suspense The Sun Down Motel thriller