BOOK BLITZ & GIVEAWAY: The Guardian (The Cities Below #5) By Jen Colly 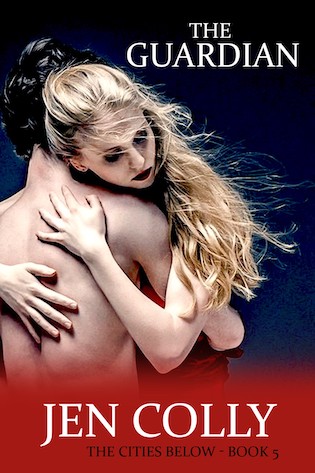 Prepared to die…fighting to live.

Savard was in a mood to die, but when a human insists on saving his life, death is no longer an immediate option. He knew of no species – human, vampire, or demon – that could see him while in his invisible Spirit form. Unique to this world, this woman’s singularity was a danger to the entire vampire race.

Waking behind bars in an underground vampire city was not how Sera envisioned her night drive ending. She has come to expect nothing from those who pass through her life, but this man, dying on the side of the road, proves to be different. Savard fights to free her from tyrannical vampire laws and to hide her unique abilities. What Sera doesn’t understand, is why he would fight his growing love for her.

Savard’s haunted past threatens to tear them apart. Soon, Sera discovers just how far her guardian is willing to go, and what he’s willing to do, to keep her safe.

A total of twelve Justice had been slaughtered in less than two nights by a single Forbidden. None of them had been prepared for the violent force of unholy power and honed skill that was Devlin Savard.

When it was done, the Forbidden didn’t bother to look around, to make certain none had enough life left in them to make a second attempt. Savard knew he’d finished them.

Stepping over the bodies and twisted limbs, the Forbidden strode to the trees, toward Gideon. In a flashing moment of panic, Gideon looked down at his body, made certain he remained concealed in his invisible Spirit form. He was, but the confirmation only gave him a marginal sense of security. Savard still advanced up the hill in his direction.

The slippery layer of snow on the grass didn’t slow the Forbidden, his injuries didn’t affect him, and Gideon couldn’t help but wonder if there was anyone in this world who could take down Savard.

Savard walked into the forest, never slowing, weaving around the bare trees at the top of the hill until he faced the spot where Gideon stood, still invisible and undetectable, or so he’d thought. How the hell had Savard known where to find him?

“Afraid to face me?” Savard asked, but not at all in a taunting manner, as Gideon had expected. Then, seeming somehow disappointed, Savard turned his back on Gideon, casually surveying the carnage he’d left in the clearing. “I can understand why.”

Gideon didn’t care for confrontation. Never had. It was a ridiculous trait for a man in his position of both Guardian and Justice to possess. Some would say he’d chosen the wrong profession, but few were aware he’d had no choice in the matter. Releasing his Spirit, Gideon appeared not eight feet behind the infamous Forbidden.

“Ah,” Savard said in a satisfied manner at the sound of Gideon’s boots sinking into the snow. Turning slowly to face him, Savard looked him over as if he’d already known what he would find. “The man who commanded the Valenna Justice.”

Not caring for Savard’s usage of the word command in the past tense, Gideon assured him, “My captain will send more men.”

“He always does,” Savard said, his gaze drifting off to some distant point. As his body turned slightly, it was clear the Forbidden’s shirt glistened wetly in the moonlight, sticking to his side.

“Am I?” Savard said easily, as if he hadn’t noticed, and then his gaze caught Gideon’s sword still secured in its scabbard. “Yet I see you’ve no interest in rekindling the fight.”

Gideon shrugged. It was true. He’d tracked him down and set the Justice loose as instructed. Nothing more. He refused to risk his life when Captain Basteen’s betrayal of the very laws Gideon himself struggled to uphold lingered fresh in his mind. “I don’t see the point. This round has been won.”

“So the generals live to fight the next battle. Is that the idea?”

“Something of the sort.”

“Be honest. That was hardly a fair fight. You brought them here to die.” Savard turned his back on Gideon again, boldly walking away. Then, just before he went down the other side of the ridge, Savard called out, his voice echoing in the night, “Want me dead? Bring an army.” 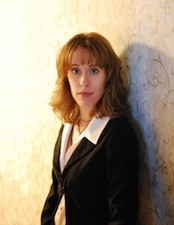 Jen Colly is the rare case of an author who rebelled against reading assignments throughout her school years. Now she prefers reading books in a series, which has led her to writing her first paranormal romance series: The Cities Below. She will write about anything that catches her fancy, though truth be told, her weaknesses are pirates and vampires. She lives in Ohio with her supportive husband, two kids, one big fluffy dog, and four rescued cats.