Skip to main content
Labels
Posted by Heidi (ReadingGrrl) May 07, 2018 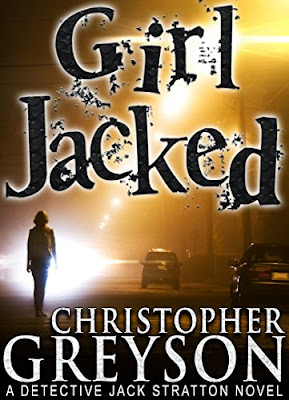 Everyone said the mystery will never be solved. They don't know Jack.

Jack Stratton's a good guy on the ugly side of life. Eight years ago a bomb blew his world apart and he's been picking up the pieces ever since. Guilt has driven a wedge between him and the family he loves. When Jack hears the news that his foster-sister Michelle is missing, it cuts straight to his core. The police think she just took off, but Jack knows Michelle would never leave her loved ones behind--like he did. Forced to confront the demons from his past, Jack must take action, find Michelle and bring her home... or die trying.

This runaway hit mystery series introduces us to handsome rogue Jack Stratton. Driven by a debt of honor to his fallen foster-brother and a deep need to protect his vulnerable, yet feisty sidekick, Jack must dive into a world full of deception and lies. But in the sleepy community of Darrington, nothing is as it appears to be. Navigating the quirky characters that hold the answers to their foster-sister's disappearance, these two underdogs must put aside their differences and fight back-to-back if they are to save Michelle. As Jack's world continues to crumble, secrets from his past drag him down. Following a trail that has grown cold, Jack must tread carefully to protect his job, his family, and his own life.

When I received notification that a new Jack Stratton book was coming out and I was offered to review it through netgalley I figured I better catch up on the rest before tackling the new one. I read the prequel to this series And Then She Was Gone and I had downloaded the rest but never got to them, until now.

Fast paced and a really fun read, I fell in love with Jack Stratton. Jack was put in foster care at age 7, he went to war with his foster brother at 18, and he will never forgive himself for not coming home with him. Now his foster sister Michelle is missing and another girl, Replacement, who was raised in the same foster home after Jack had left is desperate for Jack's help to find her.

Replacement is 19, full of fire and passion and an expert hacker is desperate for Jack to help her.  Their foster mother Haddie knows that Jack will find out what happened to Michelle.

Jack is now a cop and has been back in the same town where he grew up for over 2 months but can't bring himself to reconnect with Haddie, and his foster sister Michelle, feeling that he let them down by not being able to save their foster brother Chandler. Now Replacement is in his face to help and he can't seem to say no.

Putting his job in jeopardy by stepping on toes Jack finds himself seeking answers and if the killer thinks  he will go away, he doesn't know Jack.

Excellent mystery and I like the budding relationship between Jack and Replacement. Jack is a complicated character with a crazy past but it has given him good instincts.